We're taking a short break from recording for the Christmas and New Year holidays then we'll be back in the studio finishing off the new album!

All is going really well and we are also in the process of setting up the World Tour for 2008!

We want to wish you all a very metal Christmas and a rocking New Year!!

The Judas Priest Machine will be rolling out on the road again next year - the tour starts in June 2008 - dates to be announced shortly!!!!

(please note that only when dates are announced here on our website are they actually official and confirmed!!)

JUDAS PRIEST were honoured by Kerrang! last night who presented them with their top award - the HALL OF FAME!!

The whole band attended the Awards ceremony and received a standing ovation when they went up to collect the award!! We'd like to thank everyone at Kerrang! for this and for making it a great night!! 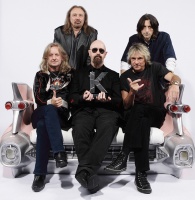 All is going really well with the new album - Glenn & K.K. are working on their guitar parts - all of the guys are going to take a short summer break then will re-group to get back to working on the album!

We are pleased to announce the launch of the only OFFICIAL Judas Priest MySpace website!

Scott has just finished his first stint in the studio which went incredibly well!! He's flown back to the US now.

Rob has just arrived over here and will be putting some vocals down - we're all really excited about how great this record is shaping up!!

There has been some confusion from various fans regarding the Knucklebonz figurine of Rob Halford that has recently gone on sale through their website - the figurine will include Rob Halford's hat!!
The company and I were in discussions originally whilst going over the details on whether to include it or not - it will be included!!

The Band are well under way in the studio - everything is coming together and sounding really fantastic!! Glenn & K.K. have been working very hard to put this album together - Scott is over next week and he and Ian will be laying down their parts - Rob will be back in the studio very soon to put his vocals down - so it's all going according to plan! As we always say - be patient - it will be worth waiting for!!